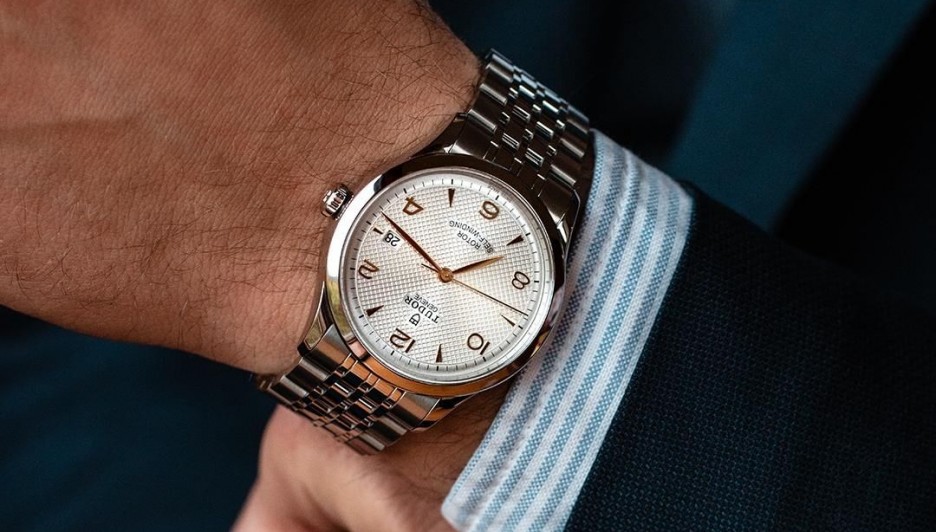 The distinctive Black Bay model is already provided with a GMT function that shows local time and follows two additional time zones. Recognisable by its rotatable bezel, which derives its deep blue and burgundy colour theme from other models in the Black Bay line, but in a matt version, the Black Bay GMT is also a nod to the early days of this watchmaking function. The new mechanism MT5652 has been developed by Tudor especially for Black Bay GMT. The case is with 41 mm diameter, water resistant at 200 meters and the watch is available with bracelet, brown leather strap and folding clasp or black fabric strap with a burgundy band.

The Fifty-Eight model’s name comes from the year in which the first diving watch of the brand has been created. The dimeter of the case is 39 mm and is inspired by the typical proportions for the 50s. The new mechanism MT5402 is developed by Tudor for watches with mid-size diameter and 70 hours power reserve. Black Bay Fifty-Eight is aptly proportioned to suit slim wrists, people who like more compact watches and, of course, vintage enthusiasts. Evocative of a time when TUDOR divers' watches were first being made, finishing touches in gold have been applied to the hour markers, hands and minute track of the black and steel bezel. The winding crown tube is in satin-brushed steel - a new feature in the Black Bay line - in keeping with the style of the case and winding crown, which bears the TUDOR rose logo in relief. Fifty-Eight comes in a new colour combination – a subtle variation on the aesthetics of the Black Bay line. The model is available with bracelet, brown leather strap with a folding clasp or black fabric strap with a gold-coloured band.

TUDOR pays tribute to its origins and watchmaking traditions with its 1926 line, named after the year when "The Tudor" was registered as a brand on behalf of Rolex Founder Hans Wilsdorf. It presents a range of mechanical watches that are timeless, classic and elegant. Available in four sizes with a wide choice of dials, the range epitomises TUDOR's philosophy: one of affordability, refinement, and quality. The 1926 line is fitted with self-winding mechanical movement that have proved to be robust and reliable. The traditional "ROTOR SELF-WINDING" marking on the dial is a direct reference to this characteristic. Offered in steel or gold and steel, the 1926 line comes in four sizes - 28 mm, 36 mm, 39 mm and 41 mm. It has been designed for women as well as men to suit wrists both big and small, with those who love beautiful things in mind. The case is made of steel, polished all over and waterproof to 100 metres (330 ft). All four case sizes are available with finishing touches in 4N rose gold which embellish the bezel and winding crown and highlight the dial details.

TUDOR’s famous Black Bay divers’ watch is now available in yellow gold and steel version (S&G, for Steel & Gold). Fitted with the Manufacture Calibre MT5612, the Black Bay S&G model also introduces the date function to the Black Bay family. In this version the lines and proportions of the Black Bay are retained, while the rotating bezel and the winding crown are made from yellow gold. The steel bracelet is also dressed in this precious metal on its central link giving it a more formal feel. The mechanism is a variation of the movement first presented by TUDOR in 2015 and has been developed for the Black Bay S&G model with a 70-hour power reserve. The bracelet of the Black Bay S&G model is inspired by the folding riveted bracelets of the TUDOR watches produced in the 1950s and 1960s. Two additional designs are available: brown aged leather strap and folding clasp or brown fabric strap, made using the Jacquard technique, a traditional method achieved by a 150-year-old family firm from the St-Etienne region of France. The overall shape, as well as the domed dial and crystal, come from the first TUDOR divers’ watches. The prominent winding crown is a feature of the famous reference 7924 from 1958 - the first TUDOR watch to be waterproof to 200 metres, known as the Big Crown.

A magnificent example of a tool watch and the symbol of a lifestyle made up of aquatic adventures, TUDOR Pelagos is one of the most complete traditional mechanical divers’ watches on the market. In 2015, this emblematic model has become one of the first two watches fitted with a movement manufactured by TUDOR and an additional colour combination, a reference to the most glorious period in the history of the brand’s divers’ watches. The new calibre TUDOR MT5612, now powering the Pelagos model, provides impressive autonomy with a 70 hours power reserve and high level of reliability and precision. This technical update of the TUDOR Pelagos is accompanied by the introduction of a new colour combination for the dial, bezel and rubber strap. In addition to its original matt black version, this model is now available in matt blue, the emblematic colour of the brand’s divers’ watches since the 1960s and the one chosen by the French Navy for the TUDOR Submariners that have been used in great numbers by its divers.