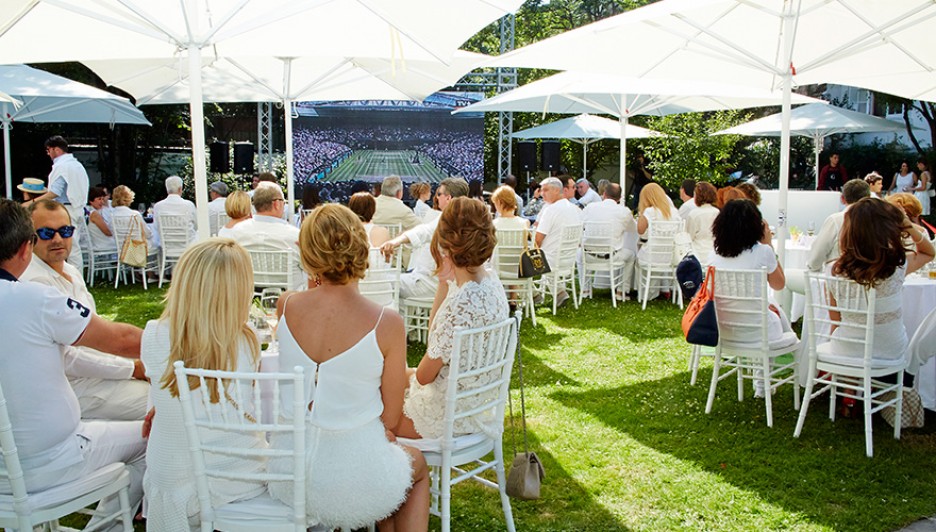 On 6th of July, 2014 the official representative of Rolex for Bulgaria, Besha, created the exclusive atmosphere of Wimbledon in the garden of the British Residence in Sofia. The strong emotions and the pride that Grigor Dimitrov brought to all of us when he reached the Wimbledon semifinals were perfectly matched with the Rolex event that turned into a natural ending of the exciting tournament. The theme of the party was “ALL WHITE WIMBLEDON AFTERNOON” and all guests arrived in the typical British garden, dressed in white according to the traditional spirit of Wimbledon.

The kind hosts from Besha – the Shakarian family, welcomed personally all the guests and did their best to make each of them experience Wimbledon in the most exciting way.

The fresh green grass in the Residence and the exquisite atmosphere make the tennis fans feel like they were right at the Centre Court in London. The gourmet menu at the event included food and beverages according to the traditions of Wimbledon – the typical glass bowls with strawberries and cream were an important element in the menu. The men's final between Roger Federer and Novak Djokovic started exactly at 16:00 h and the fans had the chance to follow and enjoy the game on a huge screen. At the end of the first set, His Excellency Jonathan Allen – British Ambassador to Bulgaria greeted the guests with a welcome speech.

The tennis fight between two of the most successful tennis players in the world was long and challenging and the emotions of the supportive audience were escalating, giving strong applauses for their favourite player. The thrill of the game was even stronger because of the organized raffle. All guests were asked to place their “bet” on who will win the tournament – Federer or Djokovic. The two lucky ones who guessed the winner, received presents from ROLEX – Official Timekeeper of Wimbledon, and VIP tickets for the semifinal and final of the Tournament of the Champions that will take place in Sofia this autumn.

The event was attended by more than 150 guests. The Sirakovi family – Iliana, Nasko and their daughters, the plastic surgeon Dr. Angel Enchev and his wife Teddy Velinova, the director Dimitаr Mitovski, the world marathon swimming champion Peter Stoychev and many representatives from the business elite in Bulgaria were among the guests. Another exclusive “guest” arrived from Geneva especially for the event – an exclusive Rolex collection. All the guests at the event had the privilege to be the first in Bulgaria to see the watches. The collection wаs presented from 7th till 17th July in Rolex boutique, located on 34, Vitosha Blvd.